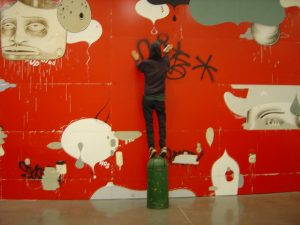 McGee has said in conversation that this figure has been a part of his work for some time, and as an anonymous and seemingly aimless as the figure appears, the viewer senses an unusual mix of symbolism and sharp satire. Reduced to the literal, as well as the metaphorical, bare facts of existence, this representative man looks like he is searching for solace. But comfort of any sort seems to have remained beyong his reach. Certainly nothing in the overall composition feels capable of alleviating the central figure’s dubious condition. The other faces, often emerging from inchoate, amoeba-like background frames, manifest a relentless idiotic expression, and the only slightly decorative brushwork occurs with the graffiti tags punctuating the large space.

The expressions on McGee’s faces are not only unintelligent but deeply unhappy, as if somehow they intuitively knew the spiritual squalor of their existence. In one grouping, a cartoon face, wearing what looks like a tonsure, stares off to the side – in any direction but that of the viewer. His tongue hangs out and his eyes are glazed, as if he were suffering the torments of an extreme hangover. Next to him is drawn an equally unprepossessing thug – with a nearly pointed head and white hair. With his closed eyes and an imbecilic grin, he bears an uncanny resemblance to Mad Magazine’s smirking antihero Alfred E. Neumann. But McGee’s more recent avatar of visionary stupidity looks far more worried than his inspired forbear.

And that’s the point. Writ large, McGee’s message looks ahead to a time when even his weird imaginings have lost their power to shock, and he, like the viewer and the village idiots populating his art, struggle to make some (any!) sense of their lives. The small installation of drawings at the corner of the mural’s right edge suggested how hard he is trying to work out an iconography of spiritual exhaustion. Consisting of scores of small drawings, this composite piece is wonderfully eloquent on the pleasures of scavenging – in both a material and metaphysical sense. Often his background is made of found materials: music sheets, Chinese newspapers, advertisements, etc. As with the wall work, here McGee is obsessed with finding a face for our time, an expression that will symbolize a certain kind of futility. Yet over time, the viewer senses something different. Even allowing for the enervation his work implies, the artist’s technical skills infuse exuberance into his Sad Sack imagery, and this energy amounts to an implied refutation of the very values his art seems to embrace.

Like McGee’s work, Veca’s Canto III might be considered a young American Caucasian male’s vision of the Apocalypse, very, very late in the second millennium. Taking the cartoon characters Popeye and Brutus as symbolic icons, he has reduced their by-now mythic enmity to a few graphically salient characteristics. Popeye has been reduced to symbolic status, and the viewer encountered only a huge, heavily muscled bicep, complete with anchor tattoos and topped off with a sailor’s cap. Brutus literally became a big mouth – row after row of mouths of clenched teeth, circumscribed with black fringed beards and intensified by a few elongated, tendril-like pink tongues, rush out at the Popeye arms. In Veca’s deliberately heavyhanded repetition, the two icons march up and down as if they were armies on a hill, off to fight an abstract, populist Armageddon.

Veca doesn’t make it clear who would win such a battle, nor perhaps is either camp meant to, for despite the broadly comic overtones of the composition, the artist is describing a battlefield that can read as a serious metaphor. Like the images in McGee’s art, the Popeye arm and Brutus mouth are rooted in the not-so-innocent iconography of America – the hardheaded stuff of cartoons and advertising. It’s clear that Veca is just as disaffected as McGee but more abstract in his presentation: his anger is implied more than it is expressed.

As a title, Canto III suggests a certain high-mindedness, even lyricism, in Veca’s vision of the world, even when the spirit of the work is as close to buffoonery. But the artist knows his own mind, indicating his dual stance with a one-sentence statement in the exhibition brochure: “Saturday morning cartoons were my catechism.” It’s the mix of high and low that makes the work affecting. Veca signs off with a quite funny smaller work. Entitled Year of the Tuna (1996), the piece is of a very happy tuna, anthropomorphically outfitted with cap and eyeglasses. His civilized manner seems in no small way due to the cigar he is smoking and the martini, complete with olive and toothpick, he has in his hand. This is a Star-Kist Charlie who has made perfect amends with the material world.

Finally, Mouraud presented a stark piece in black and white that worked in another direction – one more cerebral, intellectually elegant. At first, the extreme elongation of the letters “WYSIWYG” – the initial letters of each word in the phrase “What you see is what you get” – rendered the work nearly illegible (this viewer first took the piece as a gargantuan version of a bar code). Once explained, however, the individual letters are easy enough to read. Mouraud’s play on a cliche argues for intellectual cognition as a motivating force and, indeed, as an actual material factor (the moment when one understands this piece feels like a key turning in the head) in the construction of art. Her conceptual bias contrasted nicely with the comic-book baroque of her colleagues, but one nonetheless wondered about the baldness of the statement – in this artist’s case, what you see is what you get, indeed.

Mouraud means to correct our penchant for overinterpreting the image – a nicely Cartesian goal – and so she fills the wall with the symbolic remains of a conundrum. Yet instinctively many of us want art to solve intellectual problems visually – that’s what art is supposed to do. For all her subversiveness and sly wit, the artist has deliberately limited her expression, and the result is somewhat attenuated, even as a corrective for passion and pretension. Sometimes the solution does away with the answer.