Annette Messager’s work is characterized by perceptual discontinuities of imagery and language which explore issues of identity at collective and individual levels. An exemplary product of the polemical May 1968 generation, her work maps out the evolution of a period still in need of discussion. This first North American retrospective comprises approximately thirty works, and includes books and collections of objects which inquire into the nature of women’s roles, constructions made of hundreds of body parts reflecting an ongoing interest in fragmentation, and installations which investigate the various meanings conveyed by objects placed in new contexts.

At the core of Messager’s art is a concern for issues of decentralization, a constant questioning of the roles of object and subject engendered by power relations. Through consistent investigation into the nature of representation, Messager creates dialectical oppositions, permitting the reevaluation of traditional constructs and exposing both their arbitrariness and potential for change. 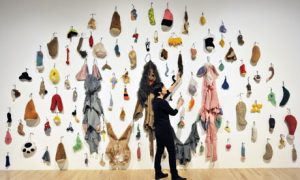 Identity plays an important role in Messager’s production. As early as the beginning of the 1970s, she pursues two identities that mimic the spatial compartmentalization of her small Parisian apartment. In the bedroom, “Annette Messager Collector” obsessively collects and classifies found objects and imagery. In the atelier, “Annette Messager Artist” juxtaposes these materials to codify her identity in relation to images of women. This separation, a literal critique of the separation between art and life and the delineation of social hierarchy, will become the precedent for such further guises as Annette Messager “practical woman,” “trickster” and “lover.” Messager sees these various guises as a way to protect herself against the external world, against passing time and against herself. The play of identity becomes evident in Collection to Find My Best Signature: Album Collection No. 24 (1972), a series of ten different signatures all bearing the name of the artist. This work has an effect of dispossessing the self by refusing the adoption of any one identity. It also addresses the difficulty to maintain a coherent identity and an integrated sense of self under the pressures of social normalcy and morality.

This sense of vulnerability is also clearly expressed in those works which emphasize the technique of fragmentation. Borrowing from photomontage, Messager literally represents the body in pieces, constructing a site for the investigation of power relations, including sexism, sexual oppression and physical violence. In other words, psychological, social and political assaults which prevent individuals from forming a whole and complete identity. Using this approach in My Vows (1988), Messager constructs a non-hierarchical circular arrangement of photographs of body parts. Her disruptive, yet formal approach of juxtaposing photographs in a concentric circle stages a confrontation between notions of heterogeneity and those of order. The spatial arrangements achieved here are ones which create spatial and perceptual discontinuities and convey a loss of unity, a lack of focus and a centre. In My Works (1987), a desire to rationalize and order the fragmented body becomes evident as well. Scattered photographs of body parts are mounted onto a wall and connected by strings and paragraphs of words, thus creating a diagram making viewers aware of their distance from the object. This critical distance explores the constructed nature of human relationships. 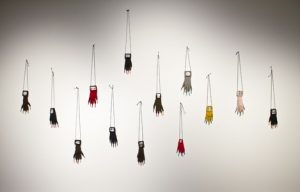 Voyeurism also pervades these works. Using photography as a critical tool, Messager produces a symbiosis between the technique and the message. She points out that “when you look through the lens [of a camera] you are peeping through a keyhole . . . photography implies a voyeuristic and in a way a sadistic relation with the subject.” By virtue of their small scale, the photographic images in My Vows and My Warks invite our gaze, invite us to explore within. We are encouraged to look closely, making us aware of our own voyeurism.

The point of view within which the photograph is taken is also very important. Suggesting the appropriation of the other through the photographic process, “Prise de vue” is a term loaded with power-related connotations. As a result of a specific prise de vue there ensues an objectification process of the subject portrayed, which leads to its dissolution. Voyeurism and its consequences on the objectification of the female body is very much present in Messager’s art as early as 1972. In Voluntary Tortures, Messager groups and collects illustrations of women submitting to beauty treatments ranging from facial peels to mud baths to more painful plastic surgeries. Here the artist comments on the subjugation of the self to socially defined standards of beauty and on the restrictions imposed on the female gender role in the eyes of socially pre-defined structures.

Messager uses photography to re-frame and re-present the subject in new contexts. To counter the seriality of photography’s mechanistic processes, Messager often paints and draws over the images. My Trophies (1984), which presents photographs of the underside of two feet, are drawn with a decorative technique resembling that of tattoo art or what has been referred to as medieval manuscript illumination. Again, through plays of scale and fragmentation, the body is abstracted and estranged from the rules of conformity and normalcy. 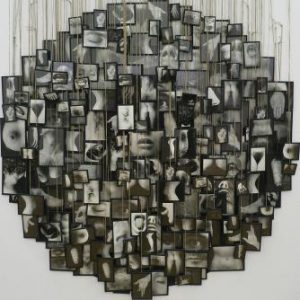 Taxidermic impulses are omnipresent in Messager’s work. Using mostly small animals such as birds and squirrels which are assembled into playful processions, the artist conveys the fragility of being and the importance of maintaining one’s full identity. Taxidermy, as a critical technique, is closely related to photography. Messager points out that both freeze motion and extend presence: “For me, taxidermy and photography are the same thing. Taxidermy takes an animal and freezes it, dead, yet alive forever. Photography also freezes, 1/60 of a second forever.” While the reproducibility inherent in photography tends to dispel the auratic traces left upon art, taxidermy may be said to retrieve and preserve this aura. One may understand Messager’s use of taxidermy as a challenge to art based in reproduction, which destroys the sense of uniqueness, approachability, authenticity and rootedness in life.

One of the more recent installations, Penetration (1993-4), presents a room filled with anatomical organs of various colours and scales, made of hand-sewn fabric recalling stuffed toys, hanging by strings of delicate yarn. A sense of authenticity pervades this work by virtue of the fact that the objects are crafted by hand, and not precisely reproducible. While these handmade objects are abstract and diagrammatic, thus maintaining a perceptual distance with the subject, the aura of the work is regained by collapsing the gap which separates us from the unique. Viewers are subjected to a state of complete absorption and empathy, precisely because they are now situated within the body, and not just outside of it. There is a taxonomic process of rationalization exposed in Penetration which involves seeing what can normally not be seen. By cutting into the space of the body, Messager penetrates it and starts re-ordering it, re-organizing it.

Messager refuses representations of humanity based on a notion of a universal subject in a totalizing history. Her art is situated within a field of discursive investigations which explore subject/object relations. While most of the techniques used by the artist are inherited poststructuralist strategies, such as fragmentation, perceptual estrangement, discontinuity and structural differentiation of the subject, her discourse is one which is very much in tune with the de-centralized body of the late twentieth century.